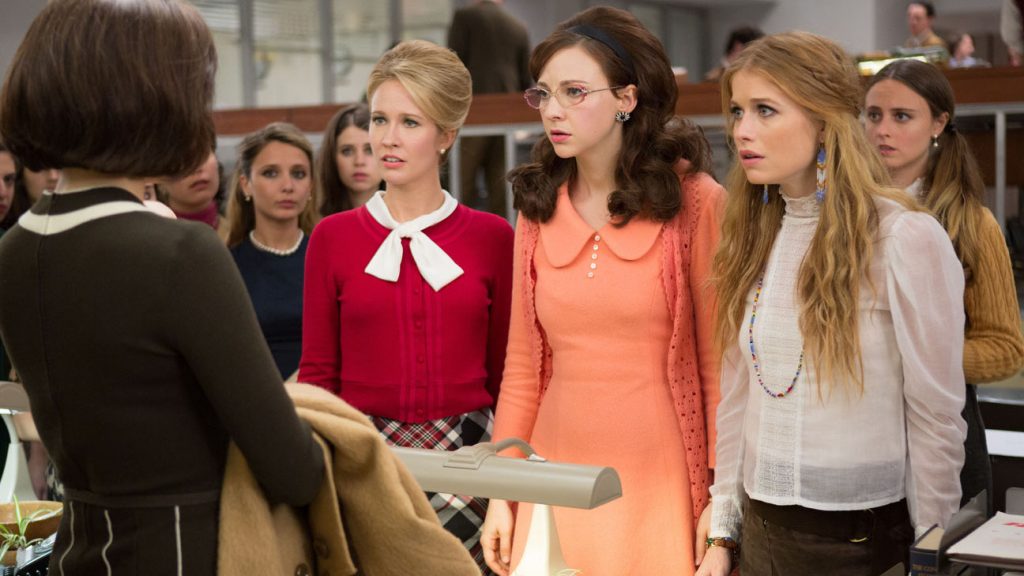 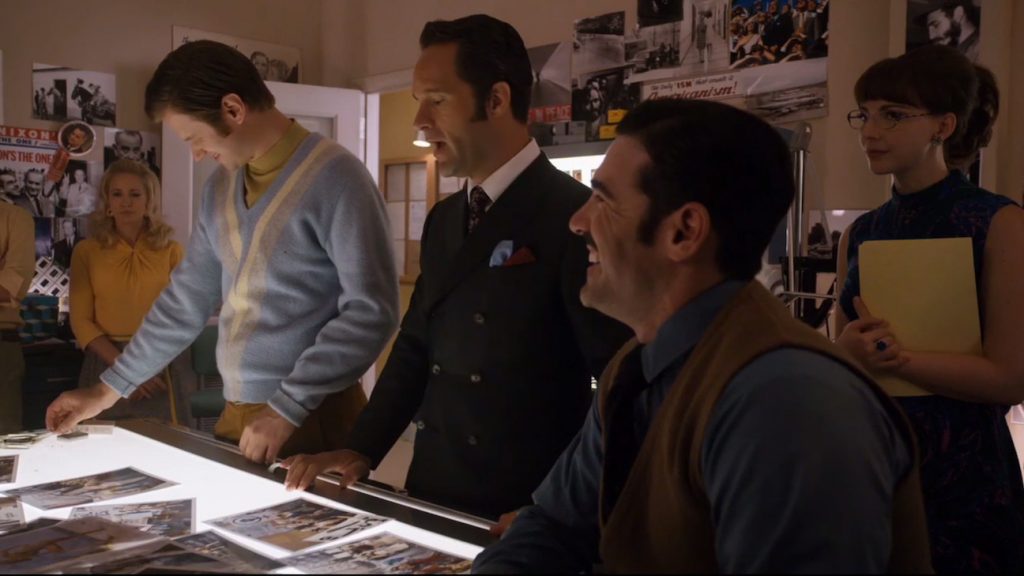 The Amazon series Good Girls Revolt, centered on a landmark 1970 gender discrimination case at Newsweek, is the kind of period drama that’s more interested in commenting on the present than re-creating the past. The storyline about professional journalists plays fast and loose with the facts, and creator Dana Calvo (Made in Jersey) employs the designation “inspired by” to characterize her drama’s relationship with Lynn Povich’s 2012 nonfiction book, The Good Girls Revolt: How the Women of Newsweek Sued Their Bosses and Changed the Workplace. Calvo portrays the bad old days of an openly sexist workplace in a post-feminist glow, as if the only problem for women’s advancement was the lack of opportunity.

The events of Good Girls Revolt take place from December 1969 to March 1970, and characters at the fictional News of the Week magazine report on real events. This approach can mean embracing the source material – as in an arc detailing a controversial Black Panthers cover story, a reference to the February 23, 1970 issue of Newsweek (“The Panthers and the Law”) – or disregarding it, as in the pilot episode, built around Altamont as an epitaph for the peace-and-love counterculture. Real-life editor Oswald “Oz” Elliott didn’t cover that event at all in the newsmagazine he cultivated as the daring liberal alternative to staid, conservative Time.

All the promise and problems of Good Girls Revolt are in that pilot. It uses institutionalized gender discrimination to highlight the hurdles working women still encounter, while oversimplifying both the newsroom environment and the real people folded into this historical fiction. Written by Calvo and directed by Liza Johnson (Elvis & Nixon), it plays more like frenetic His Girl Friday than methodical All the President’s Men, but still effectively introduces the central characters: flame-haired hippie Patti Robinson (Genevieve Angelson), icy upper-crust blonde Jane Hollander (Anna Camp), and endearingly nerdy brunette Cindy Reston (Erin Darke).

The smart, ambitious women of News of the Week are researchers, which means doing the legwork of journalism (gathering, organizing, and finding a narrative for relevant facts) and providing it to their male reporters, who do the final write-up and get the byline. They’re literally looked-down upon: the women’s desks are located on a lower level in the newsroom, known as “the pit.” (At the time of the real lawsuit, women at Newsweek were also mail girls, clippers, and fact-checkers. There was one female New York Bureau reporter, and Povich herself was a junior Life & Leisure writer.) 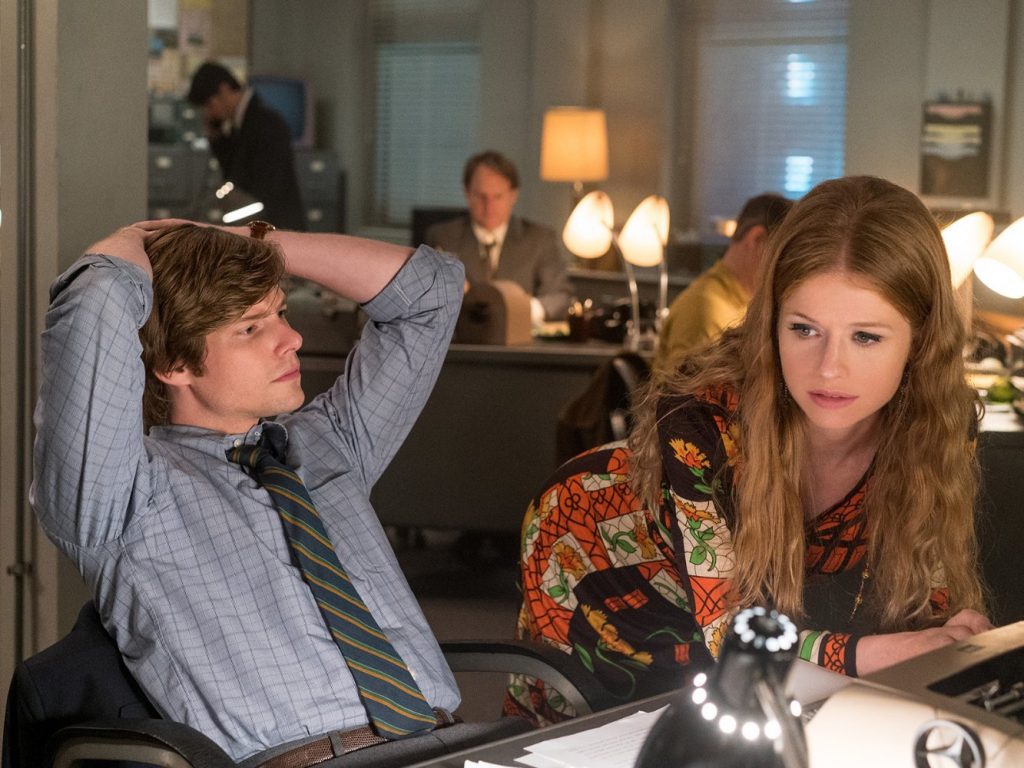 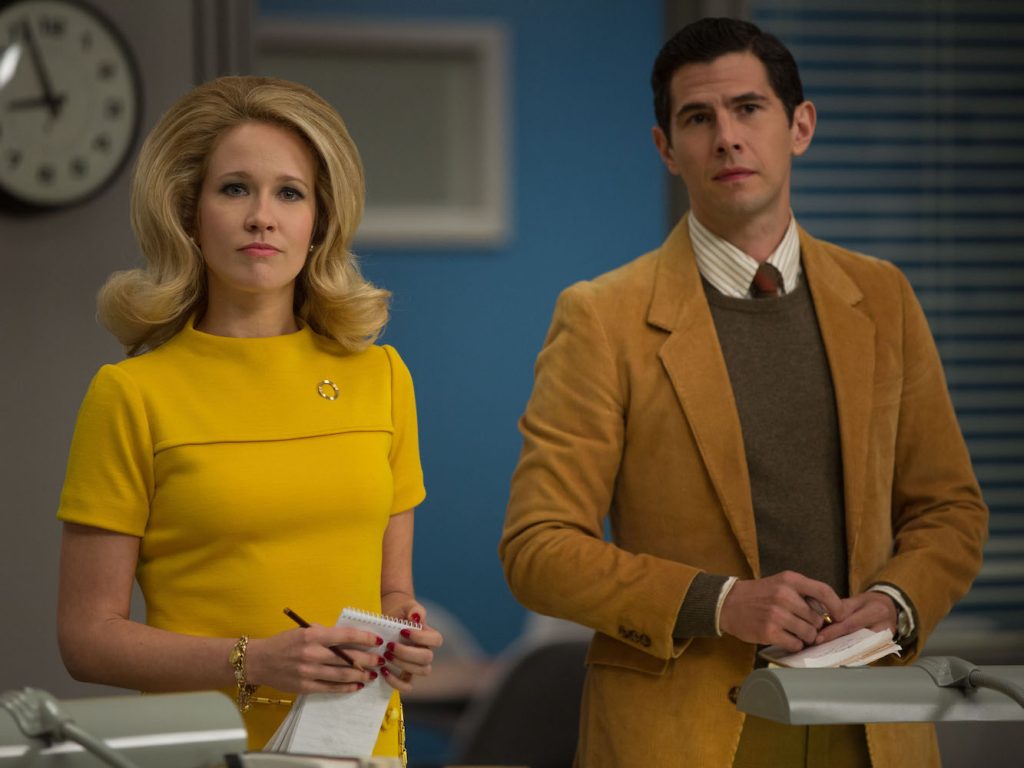 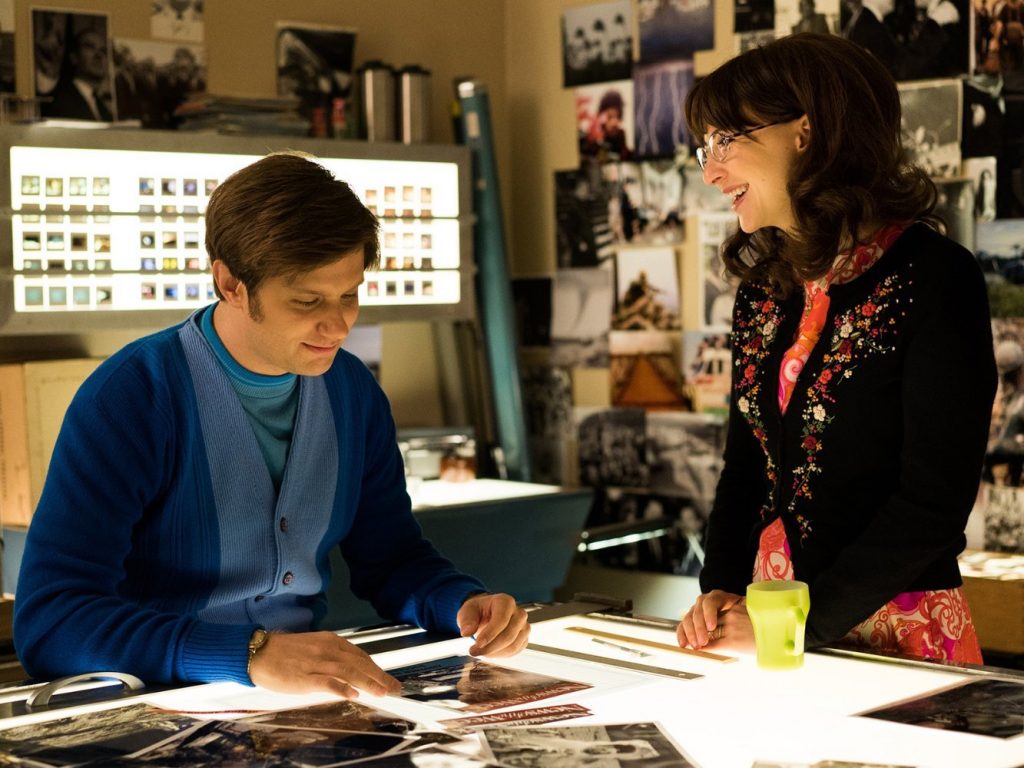 Patti pushes at the restrictions, developing her own sources and contributing crucial information that can make or break a story. She’s in a relationship with her partner, golden boy Douglas Rhodes (Hunter Parrish), who resembles Robert Redford’s Bob Woodward, and their sexual attraction is fueled by a competitive desire to produce work that gets the cover.

Jane’s WASP parents disapprove of the Jewish reporter she’s assigned to, Sam Rosenberg (Daniel Eric Gold), but she uses all her well-bred charm and sharp intellect to make him a rising star. She models herself as the perfect work wife, providing Sam with unwavering support and unquestioning loyalty, even finding a source for a piece on returning Vietnam veterans by digging through his high school yearbook.

While Jane maintains a proper distance from smitten Sam, married Cindy enjoys her flirtatious relationship with photo editor Ned (Michael Oberholtzer), often ducking into his secluded office. Chafing at the timeline imposed by her husband, a year of work before having their first child, she subsumes her desire to write a novel in the routine task of captioning photos. (A mouse that roared, Darke’s Cindy is the show’s breakout Peggy Olson character.)

A fourth woman looms large in the pilot: Nora Ephron (Grace Gummer). She’s the magical feminist of Good Girls Revolt, waking up her sisters to injustice. Nora emboldens and empowers, providing every woman with the precise piece of information she needs to get on the path of enlightenment. She’s the consummate New Yorker, a live-your-best-life advice dispenser, and the lone brave voice directly challenging the status quo. This Nora is also a fabrication. Ephron did work for Newsweek after graduating from Wellesley in 1962, and considered herself lucky to be the “Elliott girl,” handling the editor’s mail and reading stories from first draft to final copy. 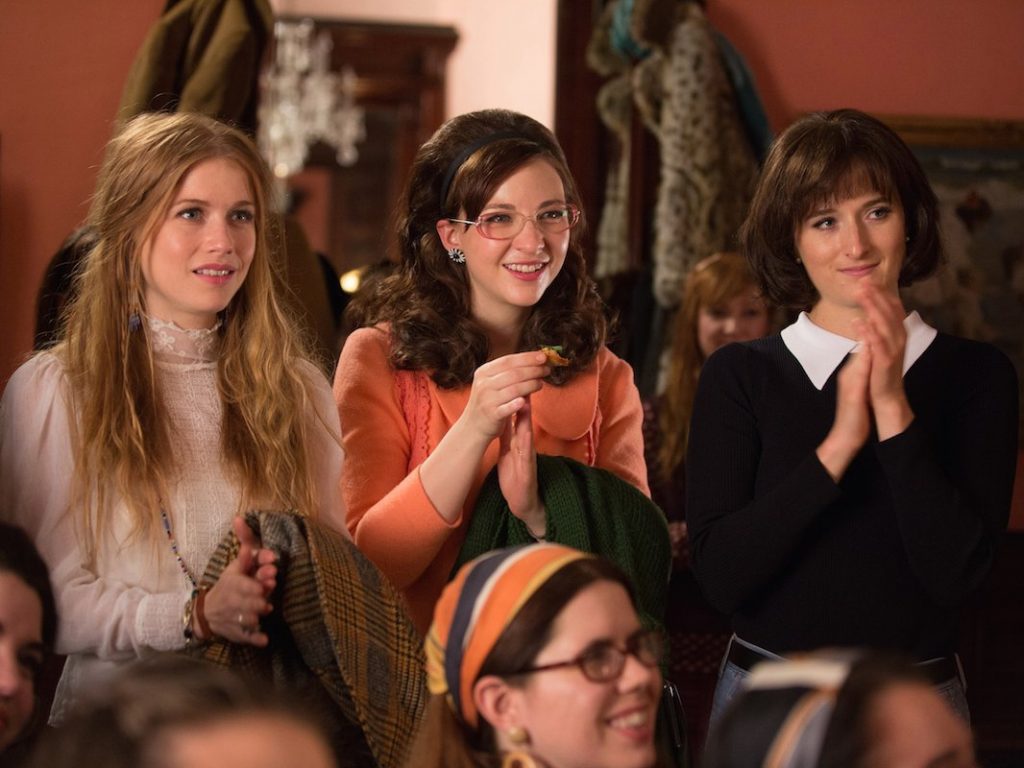 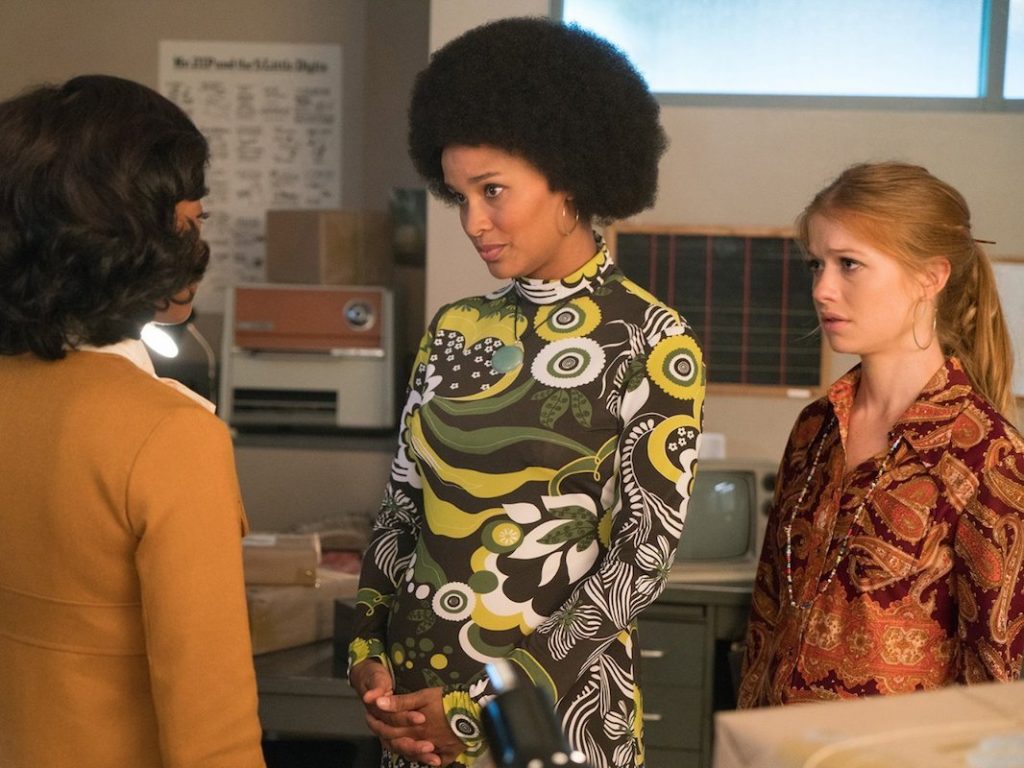 But by imposing such an inspirational figure as the instigator of the action, Calvo diminishes her characters. Nora gets Patti and Cindy to the consciousness-raising meeting where they encounter lawyer Eleanor Holmes Norton (Joy Bryant), the real ACLU attorney who handled the Newsweek case. Calvo’s women, otherwise portrayed as intelligent and ambitious, need to be led by a strong leader with all the answers, be it Ephron or Norton. The real women organized themselves and sought out Norton, joining together to shatter the image of “the good girl” who’s grateful for an opportunity to work outside the home and accepting her second-class status. Their fictional counterparts demonstrate little of that initiative – they succeed despite themselves.

Calvo and her writing staff also blunt the confrontational attitudes of 1970 with the inclusive language of 2016. There’s barely any era-appropriate slang, and even the most charged encounters play out tamely. The Black Panther who challenges Doug about his white privilege can’t come up with an insult more biting than calling him “Sundance.” Discussions of police profiling and racism sound as if they’re lifted from contemporary news programs, and the deferential respect shown to returning veterans is more attuned to today than the contentious Vietnam War, when anti-war sentiments translated into an open hostility to the drafted young men who fought it.

The overall timidity of Good Girls Revolt results in a soft misogyny of low expectations. Calvo hesitates to show central male characters (including imperious editor-in-chief “Finn” Woodhouse, played with blithe authority by Chris Diamantopoulos) being overtly sexist. So it’s other reporters who treat the hiring of a new researcher as if they were selecting a mail-order bride, and a different editor who encourages a woman to share her opinions about a story and then flashes his penis. What’s missing is the virulent sexism of even today, much less what emerged during the 2016 presidential campaign, aimed at female journalists and Hillary Clinton.

In 1970, abortion was still illegal, birth control was restricted, and women were more financially dependent on men (one episode details a researcher who needs a signed approval from her husband serving in Vietnam despite using her own money for a real estate transaction). But Calvo shows men who actually had state-sanctioned power over women acting with more restraint than the average internet troll. Even with the questionable choices, this well-intentioned and female-positive (women directed six of the 10 episodes) series is thoughtful entertainment. But right now, after an election when women’s rights, women’s dignity, and women’s abilities were summarily dismissed, that’s just not enough.

Review by Serena Donadoni
Series premiered on October 28, 2016 on Amazon
First published in The Village Voice, 2016.