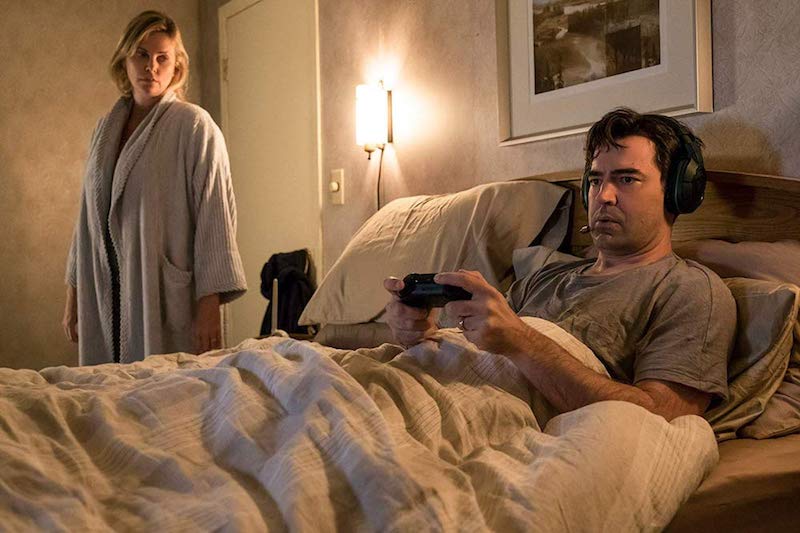 Following Juno (2007) and Young Adult (2011), Diablo Cody and Jason Reitman have completed their trilogy of self-delusion with Tully, a gently sardonic look at a forty-year-old woman who finds herself in a cluttered house, with a clueless spouse, preparing to have a third child. The staid suburbia Marlo (Charlize Theron) inhabits isn’t defined by conformity but by all that’s left unsaid. This deliberate silence can be played for laughs, such as when her boring husband, Drew (Ron Livingston), tries to describe his number-crunching job and no one can muster enough interest to get a decent explanation out of him. But for Marlo, barely cognizant of her life beyond daily demands, not saying what matters is a way to avoid acknowledging the unhappiness that dulls her every thought.

Everyone functions as if not uttering words like postpartum depression or autism spectrum will keep their fears from being realized: Marlo’s brother Craig (Mark Duplass) carefully alludes to difficulties she experienced after the birth of son Jonah (Asher Miles Fallica), now a “quirky” kindergartener. Joking about the wealthy Craig’s obnoxious ostentation helps Marlo and Drew deflect their dread of potential economic instability when two incomes meet three kids. Marlo sinks further into isolation after the birth of Mia, her maternity leave succinctly rendered onscreen as a groaning cycle of fatigue with contrapuntal onesie snaps.

Cody and Reitman’s comedies are built on a bedrock of misery, a truth more obvious in Tully and Young Adult than in Juno. Ellen Page’s impish insouciance, the playful bantering of Cody’s Oscar-winning screenplay, and the heightened reality of Reitman’s compositions all served to transform Juno from a morality tale about teenage pregnancy into a fairy tale of self-constructed families. Any doubts, cynicism, or bitterness were shifted onto the adoptive parents’ crumbling marriage. By contrast, the new parents in Young Adult came wreathed in a beatific glow, a beloved couple whose obvious happiness was only heightened by the arrival of their first baby. Theron gave a whiz-bang performance as a would-be homewrecker, but her character, in the end, proved little more than a pitiable interloper.

Marlo and Drew fall somewhere in between, not headed for divorce but long past any idealized image of parenthood. She shoulders most of the childcare responsibilities, including testy school meetings with Jonah’s principal, with Drew’s contribution limited to helping eight-year-old Sarah (Lia Frankland) complete her homework. Marlo’s already heavy workload is compounded by sleep deprivation, but she’s so accustomed to going it alone that she initially rejects Craig’s offer of hiring a night nurse to help with the newborn. Theron’s numb resolution as she sits slumped in a chair, attached breast pumps methodically filling with milk, is a potent vision of a woman weighed down by physical and emotional exhaustion.

The arrival of Tully (Mackenzie Davis), a ghostly figure tapping on the textured glass of Marlo and Drew’s modest middle-class house, signals a shift in Marlo’s perception. She doesn’t know what to make of this boho caregiver in high-waisted jeans and crop top, bubbling with enthusiasm and ready to dive into Marlo’s life. It helps that one of Tully’s first actions is to congratulate Marlo on the accomplishment of childbirth, chirping about the baby, “You made her from the toes up!” The weary Marlo may want to respond with an eye roll but accepts the compliment with a small smile.

Tully soon becomes a confidante and sounding board, the kind of supportive female friend this overextended working mom didn’t realize she’d been missing. Marlo appreciates her free-spirited eagerness, and offers advice from the perspective of a woman examining the consequences of her decisions. With Tully, Marlo can finally admit out loud that she settled for the kind of life that she once believed was beneath her. It’s a recurring theme for Cody: self-identified rebels who eventually embrace traditional romance and domesticity.

Working with Eric Steelberg, his cinematographer since Juno, Reitman stripped down his shooting style in Young Adult, going for a glaring reality rather than the glistening perfection of Up in the Air. He gets even looser with Tully, using more handheld shots and tightly framing characters in the places where they feel most confined. The scenes between Marlo and Tully play like they’re captured on the fly, and these private, anything-goes conversations have a dreamy intimacy. During Marlo’s euphoric re-emergence, Theron lights up her face and Reitman lightens up her world.

Cody often employs a third-act surprise, but with Tully she reveals a downright Shyamalanian capacity for alienating an audience with a major plot twist. She presents it as a challenge for viewers to treat the story of a woman re-evaluating her life with the same seriousness as they would a mathematician tackling an unsolvable equation — and it works. Tully encapsulates the psychological process of maturity with pithy humor and vertiginous insight. Tully’s appearance may have seemed like a magical interlude, but she solidifies Marlo’s reality by exposing the path that led her there.

Review by Serena Donadoni
Released May 4, 2018 by Focus Features
First published in The Village Voice, 2018.