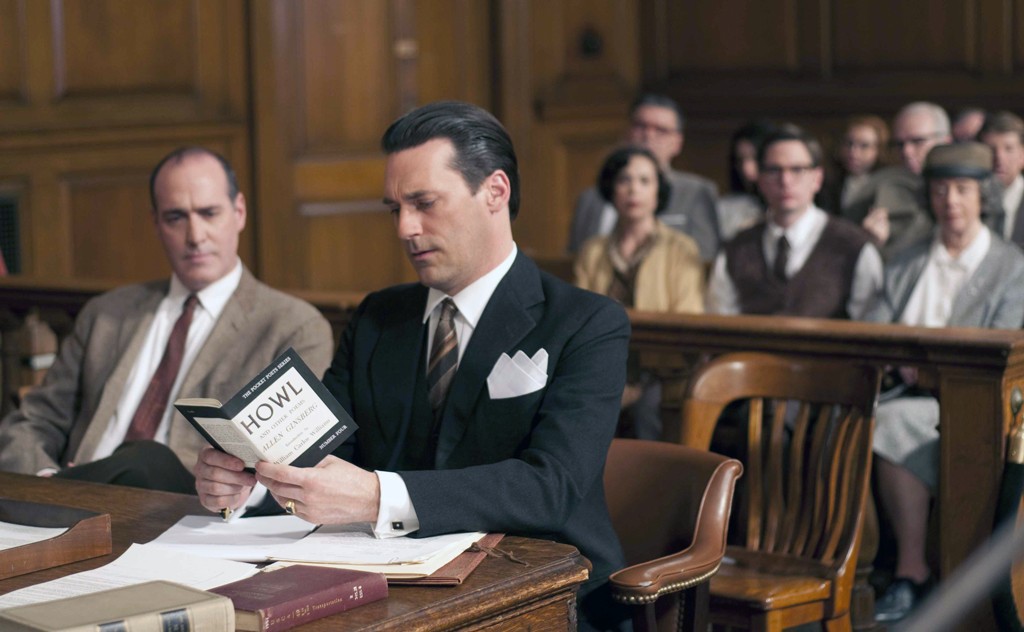 A mash-up of docudrama, animation, and literature, Howl is a bold attempt to explore the impact of a seminal poem and the writer who burst forth from its creation. In their first non-documentary film, the team of Rob Epstein and Jeffrey Friedman create a mixed media portrait of poet Allen Ginsberg’s formative experiences, including homosexual relationships with revered figures of the Beat generation and an obscenity trial for Lawrence Ferlinghetti, the publisher of Howl and Other Poems. Even with so many hot-button issues, their Howl is cool, calm, and collected. The film takes its cue from the soft-spoken performance of James Franco as Allen Ginsberg, who learns that powerful words don’t need volume to truly be heard.

Rob Epstein won his first Academy Award for The Life and Times of Harvey Milk (1984), and a second for Common Threads: Stories from the Quilt (1989) with co-director Jeffrey Friedman, both very straightforward documentaries about gay life in America. In Howl, Epstein and Friedman utilize four parallel narratives to illustrate how this complex, singular text came into being. First is reenactment: Allen Ginsberg takes the stage at the Six Gallery in San Francisco on October 7, 1955 to unleash Howl, reading it publicly for the first time, with Franco capturing his distinct cadence and gentle exhortations. The receptive audience includes inspirations Jack Kerouac (Todd Rotondi) and Neal Cassady (Jon Prescott), lover Peter Orlovsky (Aaron Tveit), and an entranced Lawrence Ferlinghetti (Andrew Rogers).

Then there’s distillation: highlights of The People of the State of California v. Lawrence Ferlinghetti, the autumn 1957 trial of the City Lights Bookstore owner turned publisher. For putting Howl and Other Poems into indelible ink, Ferlinghetti is charged with printing, publishing, and selling obscene writings. Prosecutor Ralph McIntosh (David Strathairn) turns his attention to Howl’s salacious passages, and advocates that average Americans should be shielded from Ginsberg’s insidious agenda. With conservative Judge Clayton W. Horn (Bob Balaban) presiding, defense attorney Jake Ehrlich (Jon Hamm) appears to have an uphill battle. Ehrlich must prove the literary value of outsider art by dissecting an avant-garde composition, one that fuses familiar poetic forms with taboo subject matter. The filmmakers create a pitched courtroom battle, where participants discuss the intricacies of Ginsberg’s work and whether or not Howl has “redeeming social importance.” 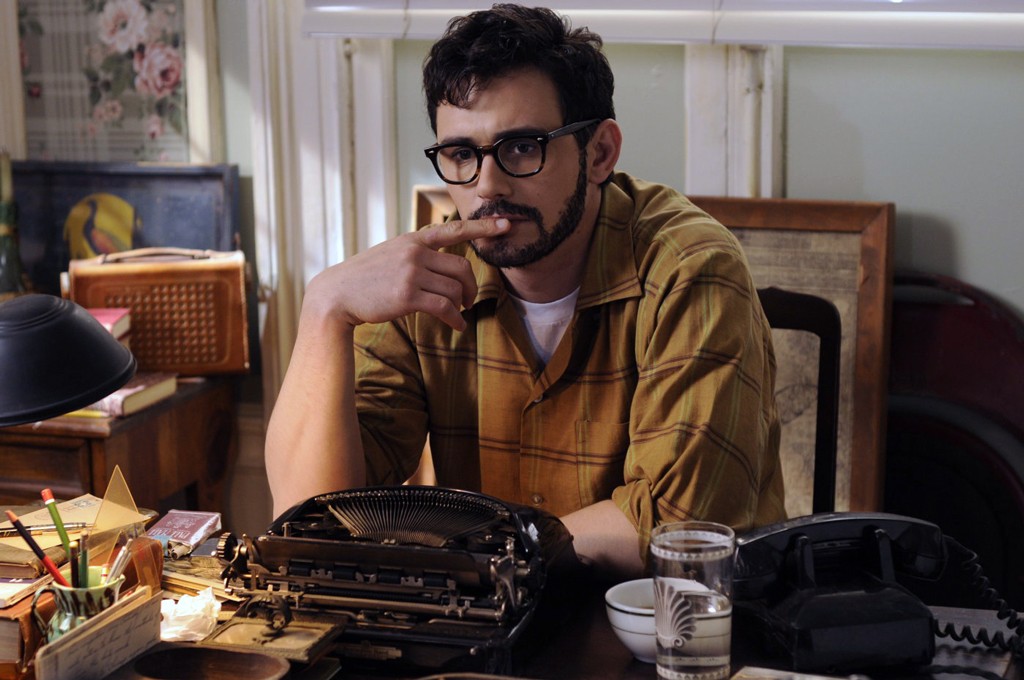 Next comes creative interviewing, as a bearded Allen Ginsberg engages in a long conversation in his New York City apartment with a barely glimpsed journalist in late 1957. Epstein and Friedman edited a number of actual transcripts to create this compilation conversation, which they’ve staged during a period when Ginsberg was said to have done an in-depth interview with Time (although no profile appeared in the magazine). With measured tones, Allen unearths painful revelations, and James Franco reveals a wholly different Ginsberg. Gone is the jittery youth from flashbacks with Kerouac and Cassady, or even the emerging poet at the Six Gallery. In that small, intimate space, Franco displays the comfortable shuffle and easy charm of the confident hippie to come.

The final element is the go for broke, love it or hate it animation of Eric Drooker, which Rob Epstein and Jeffrey Friedman describe as “a Beat Fantasia.” Where so much of Howl feels careful and measured, these segments come off as outright flights of fancy – anarchic bursts of expressive (often carnal) images. Drooker worked with Ginsberg on Illuminated Poems before the poet’s death in 1997, and he employs the same bold style for Howl (both the film and a new graphic novel). The problem isn’t the mix of genres: the filmmakers expertly jump from courtroom to apartment to gallery to animation, demonstrating how Ginsberg’s life influenced his work. It’s that the literal nature of the Drooker’s imagery blunts the overall impact of the poem.

In court, one of the tactics employed by prosecuting attorney Ralph McIntosh is grilling expert witnesses over specific passages in Howl. (McIntosh and Jake Erlich previously faced off on another high-profile obscenity trial: Howard Hughes and his 1943 film The Outlaw.) He asks San Francisco Examiner book critic Luther Nichols (Alessandro Nivola) to expound on Ginsberg’s double entendres, and Professor Mark Schorer (Treat Williams) of the University of California at Berkeley to define oblique references and literary allusions. “Sir, you can’t translate poetry into prose,” Schorer tells McIntosh, “that’s why it is poetry.” Translating poetry into animation – even images as beautifully Blakeian and Ginsberg-sanctioned as Drooker’s – also denies individual interpretation. Howl is read in its entirety during this 85-minute film, which is densely packed with details about the cost of rebellion in a conservative era. The poem comes off best during the Six Gallery sequences because of the crackling energy in the room: adrenaline propelling a nervous Ginsberg from the first hesitant lines to his concluding “holy” litany, and emanating from audience members who knowingly cheer insider references. Most of this ambitious poem is paired with Eric Drooker’s animation, and these portions feel like voiceover narration, particularly when Ginsberg’s words are forced to compete with Carter Burwell’s insistent electronic score.

Casting the ubiquitous James Franco as Allen Ginsberg may seem like an odd choice, but he’s spot-on, fully sinking into the poet’s particular grooves and exuding the engaging aloofness of someone rattling around in their own head. Rob Epstein and Jeffrey Friedman populate the film with actors who are comfortable in the period, like David Strathairn (Good Night, and Good Luck) and Jon Hamm, whose carefully modulated voice and forceful presence are familiar to viewers of Mad Men. Hamm seems like too safe a choice, until he’s pitted against the formidable Jeff Daniels as prosecution witness David Kirk, an English professor at the University of San Diego who dismisses Howl outright.

As Erlich grows more commanding and Kirk more flustered, it’s not difficult to see why this polished attorney was called “The Master.” Their barbed exchange revolves around whether or not Howl has literary merit, and it’s a deft demonstration of how a particular vision of America rattles the status quo. Lawrence Ferlinghetti faced criminal charges as the maker of a commercial product – the physical book called Howl and Other Poems – but it was poet Allen Ginsberg, creator of this personal epic, who was threatened with silence. Ginsberg’s response to this repression wasn’t pain, but a kind of joy. This choice helped define him as an artist, and it’s one of the reasons his Howl still reverberates 55 years later.

Review by Serena Donadoni
Released on September 24, 2010 by Oscilloscope Pictures

Howl is available on Amazon Prime and Fandor