You Don’t Mess with the Zohan 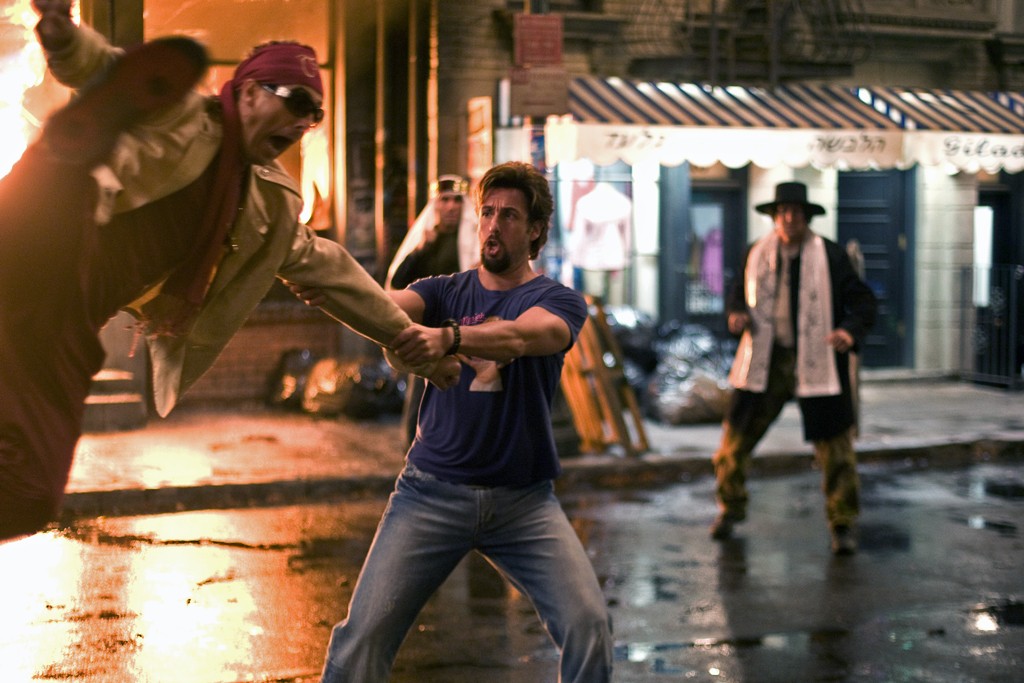 Adam Sandler may not actually wear a costume in You Don’t Mess with the Zohan, but his Israeli commando is a superhero nonetheless, albeit a comic one. Gifted with superhuman speed, agility, and strength – the ability to leap down small buildings and stop a bullet with his nostril – Zohan Dvir is as weary of his responsibilities as Spider-Man and decides he wants Peter Parker’s life instead. So he heads to New York City, his well-worn 1987 Paul Mitchell book in hand, to become a hair stylist.

But first he must fake his own death in a confrontation with his Palestinian rival, Phantom (John Turturro), who possesses some Spidey skills of his own. Sandler, who wrote the screenplay with Robert Smigel (Triumph the Comic Insult Dog) and current comedy kingpin Judd Apatow, has envisioned Zohan and Phantom as rival wrestlers with a cause, each with a fan base heavily invested in their victory. So when they stand face-to-face, loudly declaring that they feel no pain, they transform the conflict nurtured over millennia into a trash-talking showdown between rivals more interested in besting each other than pursuing a political agenda. And that’s the point of the Zohan: blending ethnic stereotypes with rampant silliness to reach a comedic détente.

The filmmakers don’t achieve that lofty goal, but like the Oscar-winning short West Bank Story (2005), they present the explosive Israeli-Palestinian conflict as a dangerous hot-air balloon that can be deflated with humor. Director Dennis Dugan keeps the action brisk and the tone breezy, focusing more on Zohan’s eccentric worldview than global politics. That’s easy since Zohan is a lover and a fighter. He zestfully services his older female clientele with more than a wash, cut, and blowout, much to the chagrin of no-nonsense salon owner Dalia (Emmanuelle Chriqui). Zohan’s lust for life also extends to Hacky Sack, disco, and making hair silky smooth.

At nearly two hours, Zohan could use some judicious trimming, but it’s hard to fault the comic asides. Phantom’s Rocky send-up is hilarious even if the joke is older than most of the audience, and every minute of Lainie Kazan’s presence is a treat. The lewd, crude, offensive, and funny You Don’t Mess with the Zohan is zealous only in its quest for laughs. Cushioning a plea for peace in 1,001 uses for hummus isn’t everyone’s idea of diplomacy, but Sandler and company find a way to make goofiness sincere.

Review by Serena Donadoni
Released on June 6, 2008 by Columbia Pictures
First published in the Metro Times.