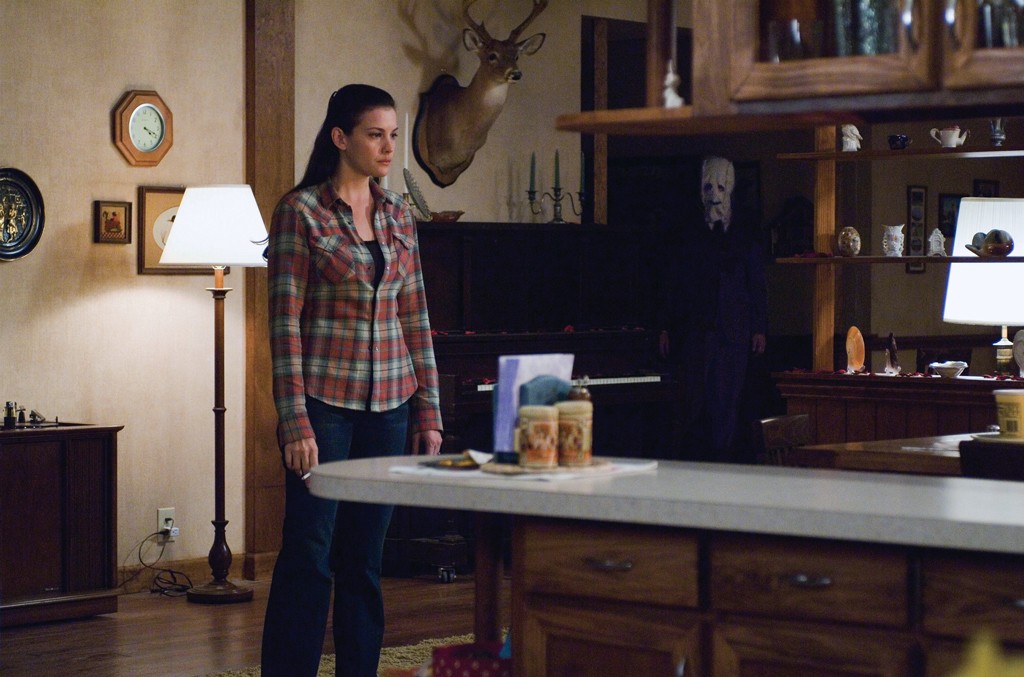 Of all the fears exploited by horror-meisters, the home invasion elicits a primal dread: it’s a violation of our most basic beliefs in safety, security, and control. In his feature film debut, writer and director Bryan Bertino adds insult to injury by toying with the audience as much as his masked invaders taunt a young couple in an isolated country house. The Strangers is all about the tease, and it’s as much fun to watch as a cat playing with trapped prey, shaking the captured creature back to life in order to derive more pleasure from its desperate squirming.

Even before the strangers appear on the doorstep of his family’s vacation home, the romantic evening James Hoyt (Scott Speedman) arranged as a surprise for his girlfriend Kristen McKay (Liv Tyler) was not going as planned. The pained expressions of James and Kristen, sitting silently in his car at a stoplight (their faces bathed in red as an obvious but nicely executed bit of foreshadowing), speak volumes about the fractured state of their union. Bertino’s spare script doesn’t provide the gory details, but a thwarted marriage proposal has left them both stunned and confused. For a few, hope-filled minutes, it seems as if The Strangers might explore the emotional carnage of unexpected rejection.

No such luck. The camera may be focused on them, but James and Kristen are simply bait and life begins draining out of them as soon as the amoral strangers inexplicably intrude on their getaway. The hapless and often clueless couple (there are so many scenes of an interloper calmly standing right behind their victim that the shocking technique becomes laughable) function as the designated targets of a cold, calculated rampage conducted with no rhyme or reason.

Even at 80 minutes, The Strangers feels drawn out, like a short story printed in large typeface so that it will fill up the pages of a novel. In a few cases, Bryan Bertino shows he can make a lot from a little, transforming an inviting, ramshackle family retreat into a house of horrors, and turning songs from the likes of Merle Haggard, Gillian Welch, and Billy Bragg and Wilco into an effective suspense soundtrack. But his constant tease puts the audience in the position of wishing death on the traumatized couple just for the sake of some resolution. It’s not bloodlust, just boredom.

The film’s biggest problem is also its selling point: the strangers themselves. They have no personalities, no motives, and almost no dialogue. In their killer costumes, these devil dolls and their scarecrow leader are a farcical Manson family acting out their own private Halloween rituals. Ruthless and relentless in their ennui, these pointless sadists inflict terror simply because they can.

Review by Serena Donadoni
Released on May 30, 2008 by Rogue Pictures
First published in the Metro Times.