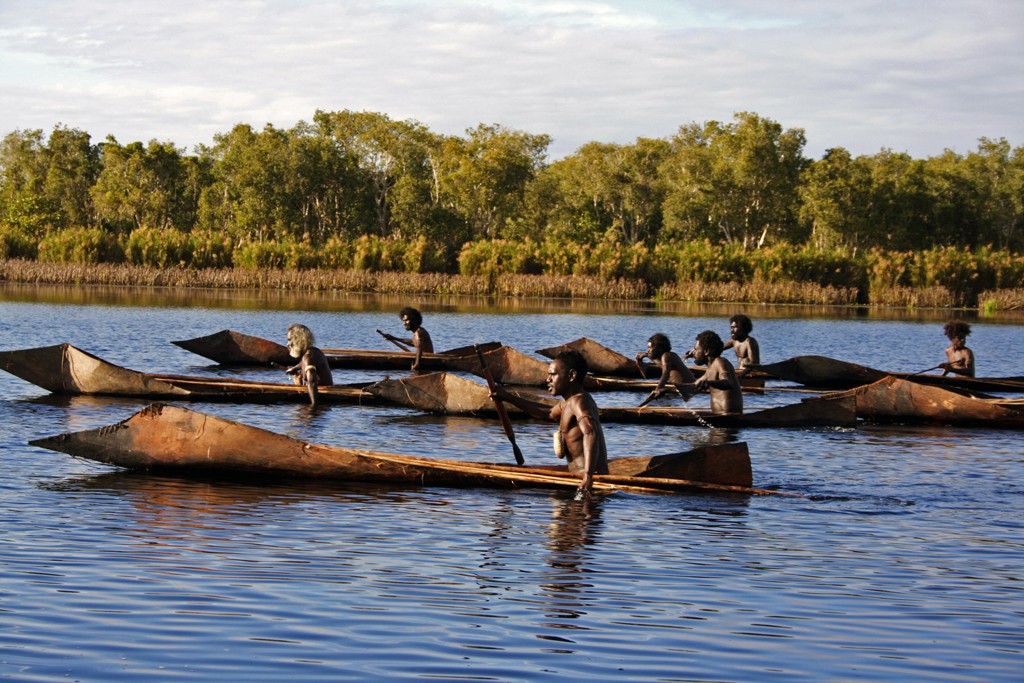 An aerial camera glides over the lush landscape of Arnhem Land, full of verdant trees and waterways teeming with life, and a voice with a distinctly Australian lilt begins the familiar phrase “once upon a time, in a land far, far away” before breaking into the cackle of a well-practiced jokester. “It’s not your story, it’s my story,” he asserts, “a story like you’ve never seen before.” And he’s right.

Ten Canoes is an intoxicating look at the pre-colonial world of Australia’s aboriginal people that never falls into the staid ethnography of National Geographic. Director Rolf de Heer (The Tracker, The Quiet Room) doesn’t treat the characters as “others” who need to be explained, or portrays them as relics of a long-gone past. Everyone is gloriously alive, full of humor and expectation, and part of a continuum that extends to the narrator, indigenous performer David Gulpilil (Walkabout, The Last Wave, Rabbit-Proof Fence). While the overall effect is of artlessness, in the sense that nothing seems encumbered by artifice, Ten Canoes is beautifully rendered.

The primary narrative follows a group of aboriginal men on a goose egg hunt in the Arafura Swamp. Their leader (Peter Minygululu) is distressed at the attention his younger brother (Jamie Gulpilil, David’s son) is paying to his third wife. As they strip bark from inland trees and construct canoes to navigate the alligator rich swamp, Minygululu begins relaying a story of their ancestors, one with obvious parallels. These scenes are shot in a silver-tinged black and white, but when Minygululu’s story is visualized, it’s in the rich color palette of the opening sequence. Here, the response of tribal head Ridjimiraril (Crusoe Kurddal) to a stranger’s arrival and the disappearance of a wife leads to unexpected and tragic changes. De Heer slides easily between these stories with the aid of Gulpilil’s engaging narration.

This film is a model of cross-cultural respect and cooperation between the Dutch writer/director and his crew, and co-director Peter Djigirr (who also plays several small roles) and the indigenous performers of Ramingining in Australia’s Northern Territory. Ten Canoes is simply “a good story” that doesn’t deify or demonize. “This land began in the beginning,” says Gulpilil, and it feels like this vibrant community still exists, just beyond that patch of trees on the horizon.

Review by Serena Donadoni
Released on June 1, 2007 by Palm Pictures
First published in the Metro Times.

Ten Canoes is available on Fandor