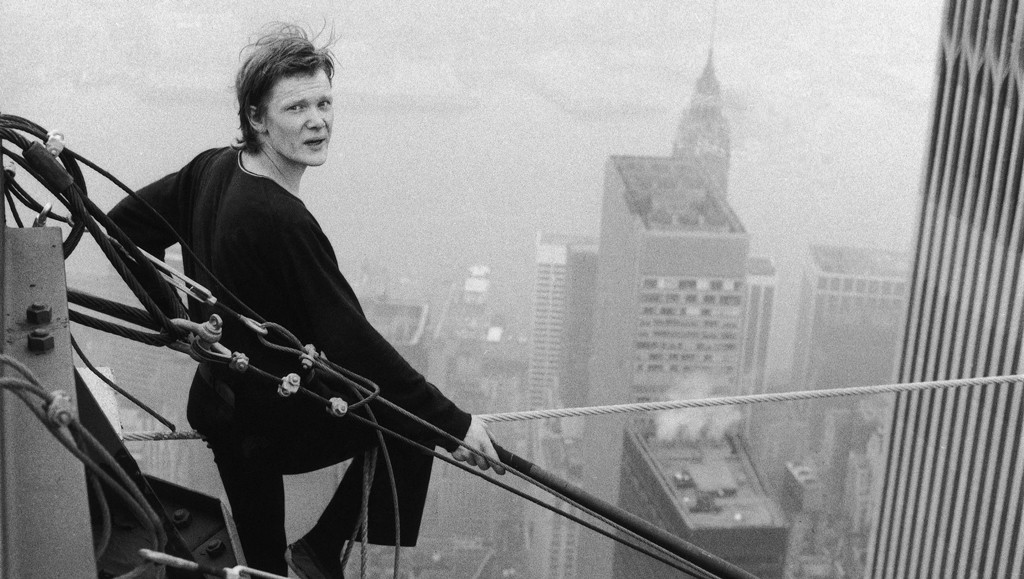 There’s a palpable tension running through James Marsh’s high-wire documentary, a sickening sense of dread that has nothing to do with French provocateur Philippe Petit or his 1974 tightrope walk between Manhattan’s newly-built Twin Towers. It comes from the knowledge of what will eventually happen to the World Trade Center that haunts Man on Wire, even though Marsh never makes mention of it. His decision refocuses the WTC as different kind of symbol, one targeted by a group of young people whose goal wasn’t destruction, but defying convention.

Petit may have been the one to traverse the cable strung in the sky, but his support team made these appearances on national landmarks (including the towers of Notre Dame Cathedral in Paris and the Sydney Harbor Bridge in Australia) possible. Breaking the law wasn’t a deterrent, it was part of the thrill, allowing this artist to redraw the lines of everyday expectations. Blending extensive interviews with Petit and his crew with well-done recreations and stunning archival footage, Marsh creates a portrait of not just a time and place, but a specific mindset, where mischief was meant to enlighten those it touched, and the only one who could be harmed was the solitary wire walker.

When he concentrates on the crew’s infiltration of the World Trade Center, Man on Wire plays like a classic heist film. Despite their meticulous planning, there are unexpected reversals of fortune ranging from the frightening to the comic, and the documentary takes on a jaw-dropping stranger than fiction quality. James Marsh uses Petit’s 2002 memoir To Reach the Clouds as a guide, and the self-taught acrobat gets the most time on camera, yet he remains enticingly enigmatic. With his easy charm and immense concentration, the charismatic Petit inspires devotion: you can hear it in the voices of those who joined his quixotic quests, even after years of estrangement.

So is he a performance artist or con artist, trickster or innovator? The only thing certain about Philippe Petit is his unwavering ability to find his balance on a tightrope, no matter where it’s strung. Without revealing some key information (such as how these ne’er-do-wells financed this ambitious project), Man on Wire beautifully details an event so extraordinary that it got the residents of a beaten-down town to stop, look up at their skyscrapers, and see the heavens beyond.

Review by Serena Donadoni
Released on August 29, 2008 by Magnolia Pictures
First published in the Metro Times.

Man on Wire is available on Netflix