Los Zafiros: Music from the Edge of Time 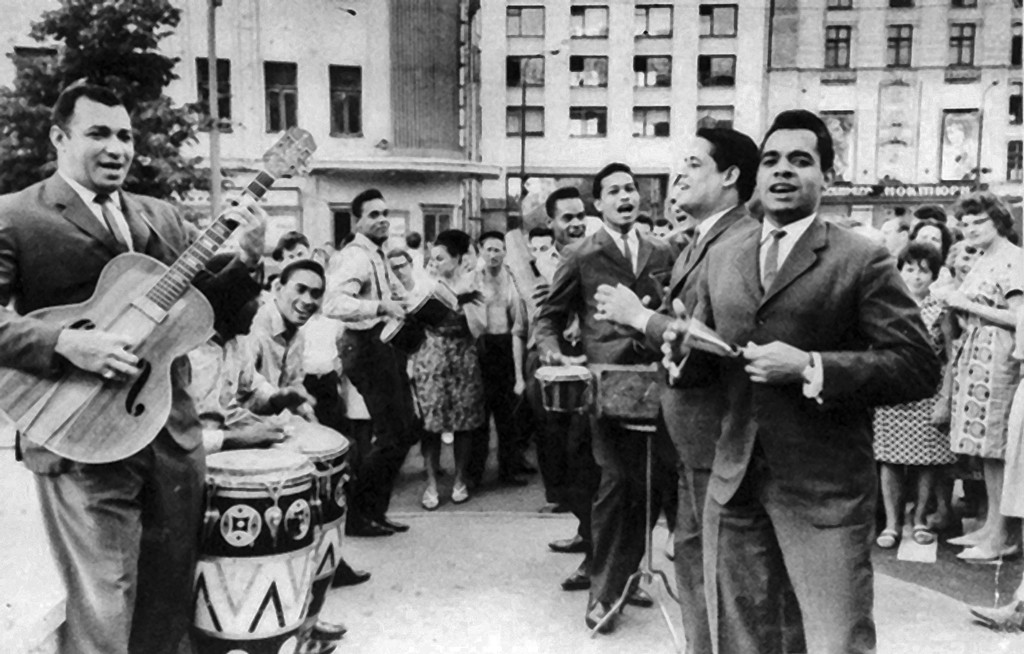 When it comes to Cuban music, most Americans are playing catch-up. (A 45-year embargo will do that to you.) As the success of the Buena Vista Social Club collective proves, there’s a sizable audience in the United States eager to find out what they’ve been missing. Los Zafiros: Music from the Edge of Time fills in one gap, with a group who represented the modern sound of Cuba in the heady decade after the 1959 revolution. Fusing Latin and Caribbean music with American doo-wop vocal harmonies, Los Zafiros (The Sapphires) were called the Cuban Platters, but they weren’t imitators. In the early 1960s, they created an inimitable, intoxicating sound that proves political barriers can’t stop cultural cross-pollination.

Director Lorenzo DeStefano opens Music from the Edge of Time not in Cuba, but in Miami’s Little Havana, where a radio station is conducting a nostalgic battle of the bands. At first, the call-in votes are evenly divided, but the most fervent callers are Los Zafiros supporters and they quickly pull ahead. It doesn’t matter that they disbanded nearly 30 years ago: in Cuba and the exile community, Los Zafiros remain vibrantly alive. DeStefano fills his documentary with fan reminiscences and vintage performance footage, but the heart of the film is the reunion of the two surviving members in Cuba. Singer Miguel Cancio leaves Miami and heads back to Havana to see guitarist and arranger Manuel Galbán. There’s an initial hesitancy before the two quickly fall into familiar grooves as they tour the Cayo Hueso neighborhood where the band was formed.

Cancio and Galbán were the oldest members of Los Zafiros, and most in the background, anchoring the vocal flights of Lenocio “Kike” Morua, Ignacio Elejaide, and Eduardo Elio “El Chino” Hernandez. Band members may have dressed in matching suits and employed Motown-style group choreography, but their music wasn’t homogenous. Kike, Ignacio, and El Chino each took the lead on songs tailored to their vocal strengths and individual tastes, which broadened the band’s repertoire and fan base. The singers also took the lead in hard drinking and bad behavior, and the communal harmonies that made them such a vibrant musical force eroded. They split up after a tumultuous decade, but to see Cancio and Galbán perform together – and visit the graves of their bandmates bearing flowers and rum – it’s clear that their bond remains intact.

Nostalgia is a powerful force in films about Cuba, whose political isolation makes it seem to American eyes that time stood still. Miguel Cancio does walk around like a ghost touring his old haunts, but Manuel Galbán, who performs regularly with Buena Vista Social Club mainstays Ibrahim Ferrer and Orlando “Cachaíto” López, displays the attitude captured in Wim Wenders’ 1998 documentary: he lives in the present, without regrets. While the film doesn’t openly discuss race, it’s clear from Cancio’s comments that because the members of Los Zafiros were black and came from one of Havana’s poorest neighborhoods, their success was more surprising – and their fans more passionate. These outsiders rose to become Cuba’s face to the world, and to represent new possibilities to the island’s residents.

Director Lorenzo DeStefano packs a lot of information into 79 minutes, and carefully skirts the elephant in the room: politics. Los Zafiros seemed to enjoy an artistic freedom denied many other Cuban musicians, who eventually went into exile. How were they affected by the Communist government? Did their success ever make them targets, or did it immunize them? Los Zafiros: Music at the Edge of Time doesn’t answer these key questions, but as a portrait of multifaceted musicians who mined the world around them and forged a new sound, it still sparkles.

Review by Serena Donadoni
Released on July 12, 2007 by Panorama Entertainment
First published in the Metro Times.