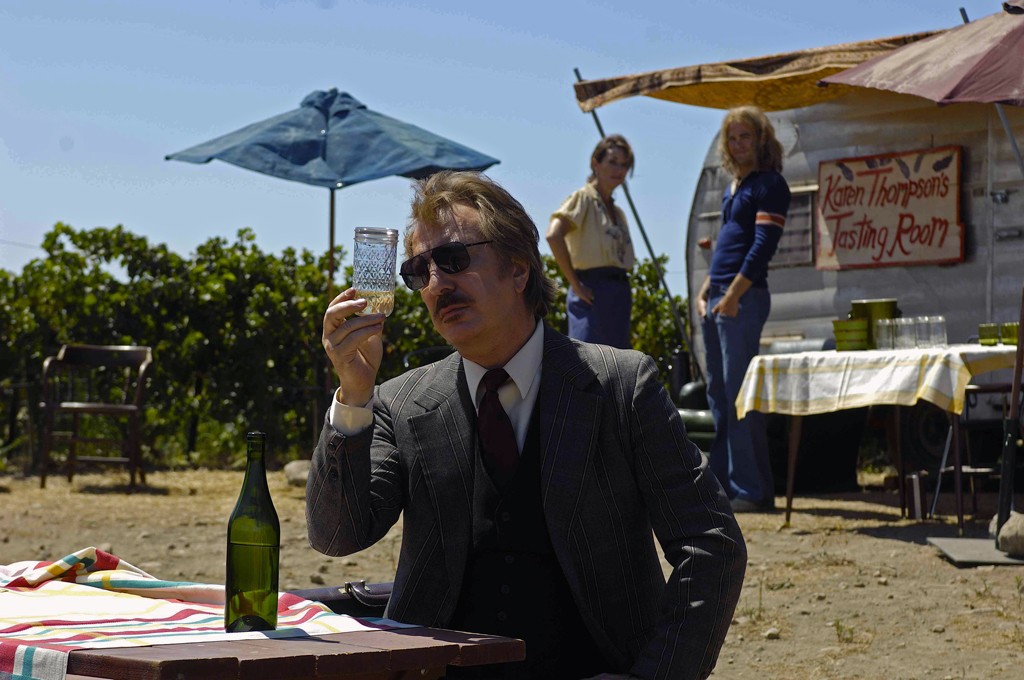 The nascent California viniculture tapped by Bottle Shock hadn’t yet bubbled into the public consciousness in 1976, when a corpulent Orson Welles intoned “we will sell no wine before its time” in television commercials for Paul Masson, whose best-selling blend came in a decanter with a flip-top. The thought that American vintages could rival the French was considered absurd until a blind taste test organized by British enthusiast Steven Spurrier, who ran L’academie du vin to educate the palates of foreigners in Paris, where he also owned a wine shop. The “Judgment of Paris” began a seismic shift in the global wine market after two California vineyards (Stag’s Leap Wine Cellars in Napa and Château Montelena in Calistoga) ended up taking top honors.

Director Randall Miller (Nobel Son) focuses on the owner of Château Montelena, lawyer turned vintner Jim Barrett (Bill Pullman), whose all-consuming drive to create the perfect California Chardonnay exacerbates his rocky relationship with aimless son Bo (Chris Pine). When Steven Spurrier (Alan Rickman) arrives in Napa Valley, managing to ooze elitism while driving a banana-colored AMC Gremlin, word quickly spreads among the growers, along with the hope that this might be their moment to shine. Miller treats this story as if it were a sports film, with the scruffy American underdogs using ingenuity and gritty determination to upset the snobby, dominant French.

Shot in nearby Sonoma County, Bottle Shock captures the feel of northern California wine country when it was still agricultural – not the upscale theme park of today – and portrays this rural community as a haven for the upstarts who moved there in the early 1970s and began revitalizing moribund vineyards. The script, written by Randall Miller, Jody Savin (his wife and frequent collaborator) and Ross Schwartz, takes a lot of liberties: the Montelena’s award-winning winemaker Mike Grgich is nowhere to be seen, ditto for Stag’s Leap founder Warren Winiarski.

Despite the dramatic license, there’s a genuine reverence for winemaking that’s missing from the connoisseurship of Sideways. (Miller and company do adopt that film’s wine is for lovers theme, with Montelena co-workers vying for the attention of Rachel Taylor’s feisty intern.) As Gustavo Brambila, a Grgich protégé who now runs Gustavo Thrace, Freddy Rodriguez delivers an impassioned sermon to his newcomer boss, recalling the long history of grape cultivation in California and equating wine with the blood of people who work the land. What’s in the bottle is alive, oenophiles say, and Bottle Shock makes the case for drinking wine as an everyday sacrament.

Review by Serena Donadoni
Released on September 5, 2008 by Freestyle Releasing
First published in the Metro Times.

Bottle Shock is available on Netflix