Allah Made Me Funny 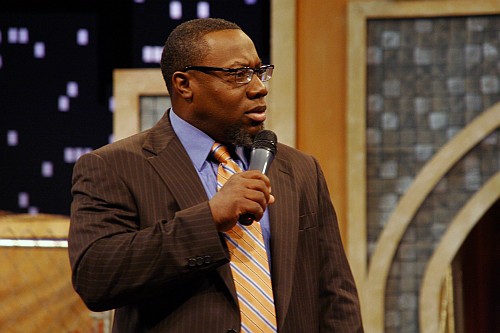 The three stand-ups of Allah Made Me Funny set out to prove that Muslim comedy is not an oxymoron, and their sharp, observational humor more than proves their point. The bulk of AMMF documents an August 2007 performance by Mohammed “Mo” Amer, Bryant “Preacher” Moss, and Azhar Usman before a large, enthusiastic, multicultural audience at the Heritage Forum in Anaheim, California, proving that it’s a small world after all.

Creating their comedy collective was a form of political action, a way for Amer, Moss, and Usman to recast the image of Muslims in America, and their show is anything but hostile or confrontational. Drawn together by their beliefs, not only in Islam but the power of humor, this trio offers comedy that’s culturally specific, yet has great crossover appeal. Revealing their lives in the familiar framework of stand-up comedy, they provide a glimpse into an unfamiliar world for outsiders as well as a forum where Muslims can recognize themselves.

Palestinian Mo Amer, who was born in Kuwait and moved with his family to Houston at age nine, draws his humor from that clash of cultures, and being the youngest of six children. Azhar Usman’s family is from India, but he grew up in the largely Jewish Chicago suburb of Skokie, and finds his funny via wry social commentary. Preacher Moss comes from Washington, D.C. and converted to Islam, and his reflections about being black, American, and Muslim manage to have a Richard Pryor bite without the profanity.

Performing clean isn’t the only old school aspect of Allah Made Me Funny. All three mine their families for droll nuggets – with much talk about their mothers – and there are several variations on the age-old henpecked husband routine. As different as their perspectives are, their common theme is the clash between expectation and reality in post-9/11 America, and each finds a way to turn that friction into insightful comedy.

Director Andrea Kalin (Prince Among Slaves, Partners of the Heart) keeps the extended concert sequences moving right along, cutting frequently to audience reactions, where laughter often feels like a release of long-held inhibitions. What Allah Made Me Funny could use is more background information, especially a discussion of how these comedians fit into (or clash with) America’s club-based stand-up infrastructure, where booze-fueled audiences expect a liberal dose of raunch with their observational humor.

The cursory behind-the-scenes footage of the comedians’ private lives, intercut between their individual sets, comes off as superficial when compared to the in-depth profile of Egyptian-born stand-up Ahmed Ahmed woven into the 2006 performance documentary Vince Vaugh’s Wild West Comedy Show. But unlike Vaughn’s comedic showcase, this concert film is clearly trying to capture something more than a male-bonding road trip for emerging talent.

Funded in part by Unity Productions Foundation, which produces documentaries about Islam for general audiences (including the PBS biography Muhammad: Legacy of a Prophet), AMMF makes two important points: that comedy can still give voice to Americans outside the mainstream; and that it’s best to let these voices speak for themselves. In 2005, Albert Brooks went Looking for Comedy in the Muslim World, but it’s the performers of Allah Made Me Funny who really found it.

Review by Serena Donadoni
Released on October 3, 2008 by Truly Indie
First published in the Metro Times.