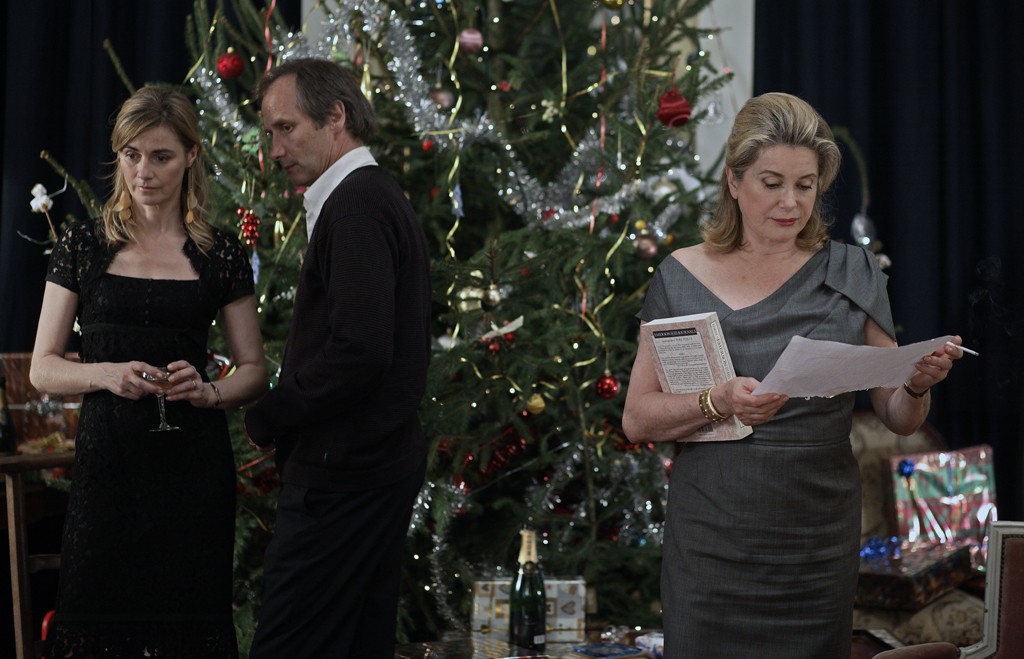 In the chaotic universe of the Vuillards, there’s only one fixed principle: no family secrets. But even with everything routinely exposed and discussed, little gets resolved except during moments of extreme crisis, when outside forces shake the Vuillards out of their languor. One such occasion comes at Christmas, when the matriarch Junon (Catherine Deneuve) receives dire news. Diagnosed with the same rare strain of leukemia that killed her eldest son, Junon now looks to her children for a bone marrow donor, aware that the treatment offers potentially lethal side effects. This familiar plotline – a family crisis during the holidays – is turned on its ear by French filmmaker Arnaud Desplechin, who plays tragedy like screwball comedy, and treats humorous moments with deadly seriousness.

It’s difficult not to react to the spectacle of the Vuillards like Faunia (Emmanuelle Devos), the impish girlfriend of prodigal son Henri (Mathieu Amalric), who shifts from puzzlement and bemusement to bursts of inappropriate laughter at the family’s actions and reactions. No one holds their feelings (or opinions) inside, but for this insular clan, there’s a major gap between awareness and action. Gathered at the formidable family home in Roubaix, a textile-manufacturing city on the Belgian border (and Desplechin’s hometown), the Vuillards gear-up for the rematch between Henri and Elizabeth (Anne Consigny). Six years earlier, she used Henri’s legal problems to mount a Machiavellian power play, and effectively banished her brother from family gatherings.

Patriarch Abel (Jean-Paul Roussillon) may own a dye factory, but the Vuillards are casually intellectual, toting around volumes of Emerson and Nietzsche. (Although their taste in movies runs to the vintage Hollywood of Funny Face and The Ten Commandments.) At one point, Elizabeth’s mathematician husband (Hippolyte Girardot) and Abel run the numbers of Junon’s survival rate while she placidly looks on. The drama of Junon’s illness and Henri’s estrangement aren’t all Desplechin (Kings and Queen) has up his sleeve. This is an eye-opening holiday for a brood accustomed to only seeing what they want to see. During 2 1/2 hours, nearly everyone will quietly reconsider the path they’ve been on and take a sideways step out of their rut.

A Christmas Tale has a classical feel, even though the mischievous Desplechin tosses in shadow puppets, iris shots, and actors speaking directly to the camera. It’s his ability to surprise that gives the film its spark, and offers the Vuillard family a propitious future.

Review by Serena Donadoni
Released on November 21, 2008 by IFC Films
First published in the Metro Times.

A Christmas Tale is available on Hulu