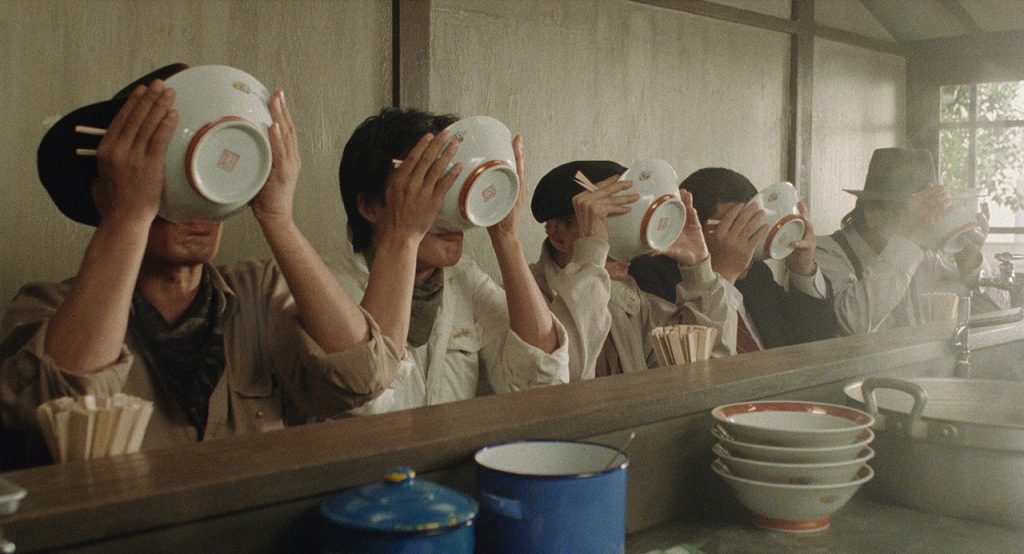 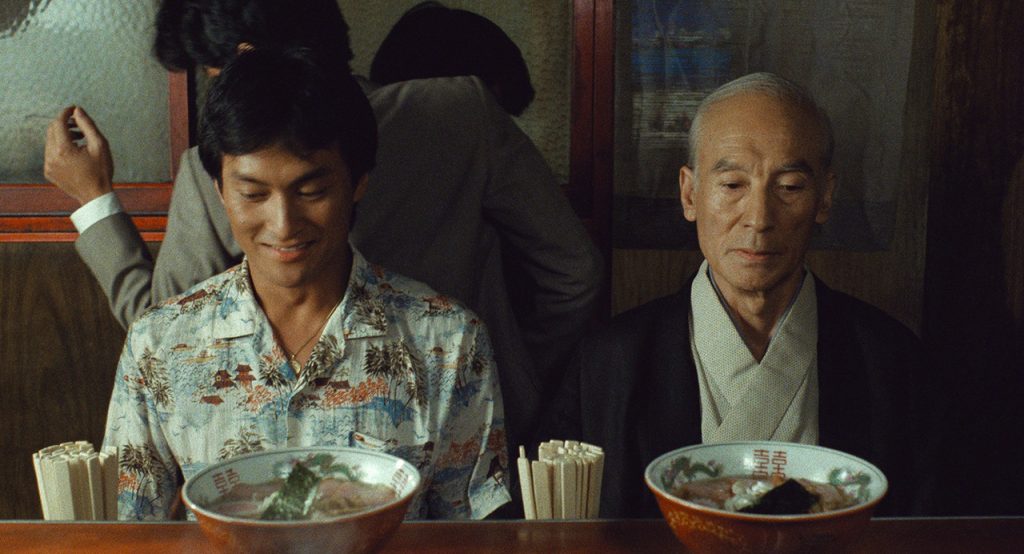 Savor the delectable comedy Tampopo on a full stomach. Juzo Itami’s 1985 paean to the fastidious preparation and blissful consumption of food created an American hunger for Japanese cuisine, and can still be enjoyed solely as a satisfying feast. But the writer and director’s second film is also a biting satire of Japanese culture and its uneasy incorporation of Western influences.

While Itami peppered his gastronomical odyssey with sketch comedy, the main storyline focuses on Tampopo (Nobuko Miyamoto), who runs her late husband’s small ramen restaurant. This ostensibly simple dish of noodles and broth is notoriously complex, and Tampopo’s ramen is mediocre at best. She’s as disheartened as her bullied son until enigmatic truck driver Goro (Tsutomu Yamazaki) rides in to the rescue. He challenges their tormentors (including Tampopo’s drunken admirer) and ends up in a brawl that echoes an American Western, with hanging fabric signs flapping like swinging saloon doors. In Goro, Itami created a hero who straddles cultures and embodies the director’s deep love of movies. 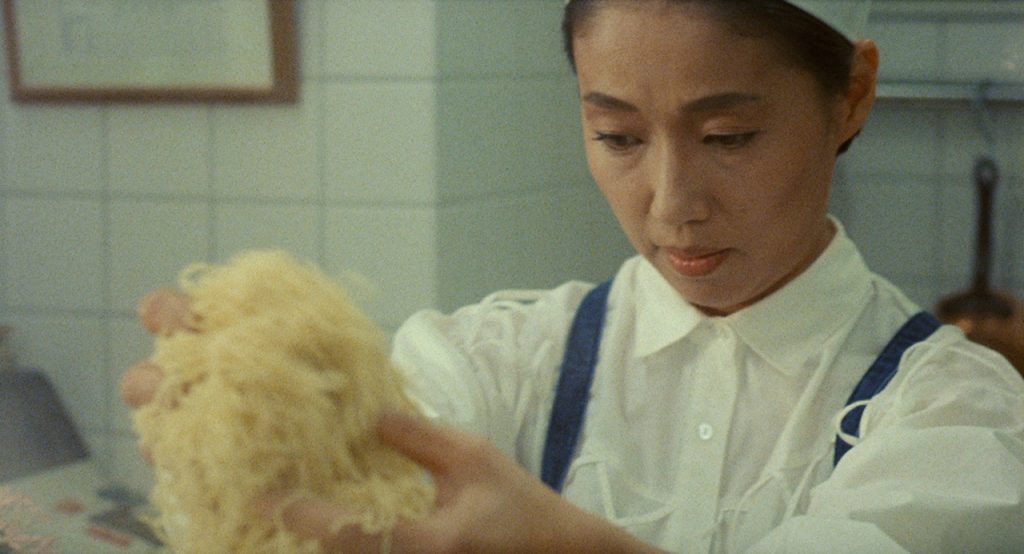 The character is like one of Kurosawa’s wandering samurai (Yamazaki starred in Kagemusha) translated into a Shane-like ranch hand, then filtered into a flinty Spaghetti Western gunslinger, and finally returned to Japan as a ramen evangelist in cowboy gear. He’s a nonconformist who appreciates tradition, and Tampopo begs his sage advice to improve her restaurant. A new restoration by Janus Films corrects the color balance of Masaki Tamura’s exquisite shading, cleans up a muddy soundtrack and adds new subtitles that are more descriptive and precise. In the original English titles, Tampopo asks to be Goro’s student, in the new translation, she seeks to be his disciple. It’s a key distinction: the pursuit of ramen perfection is treated with ritualistic reverence.

Tampopo’s humor can be gut-busting, but food is never the butt of the joke. It triggers behavior and serves as an expression of individual philosophy: the magnetic gangster in a white suit (Koji Yakusho) who directly addresses the audience in the first scene uses food to relish the carnal pleasures of a fleeting existence. An egg yolk passed between the gangster and his bubbly girlfriend encapsulates mature female desire, and his encounter with a girl harvesting oysters reveals her burgeoning sexuality. 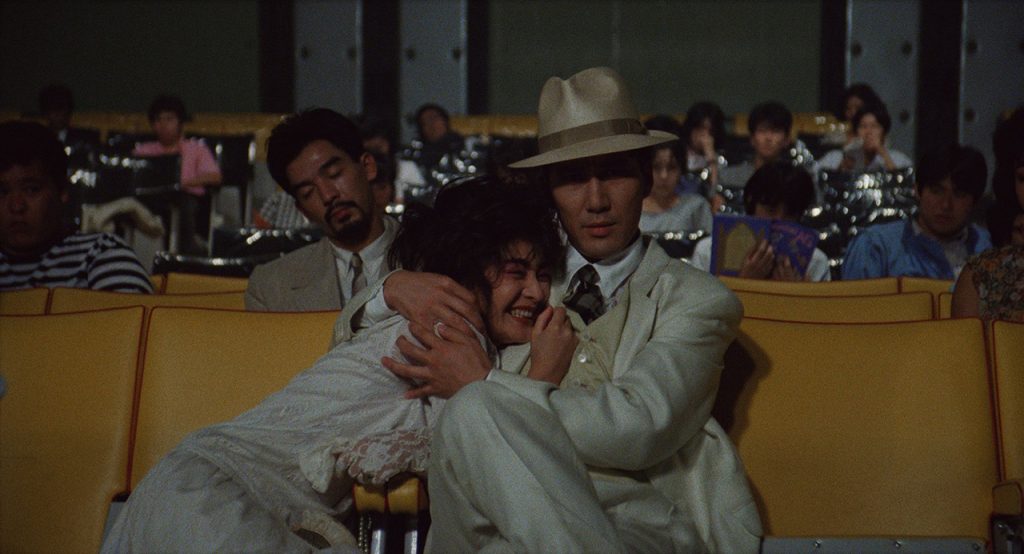 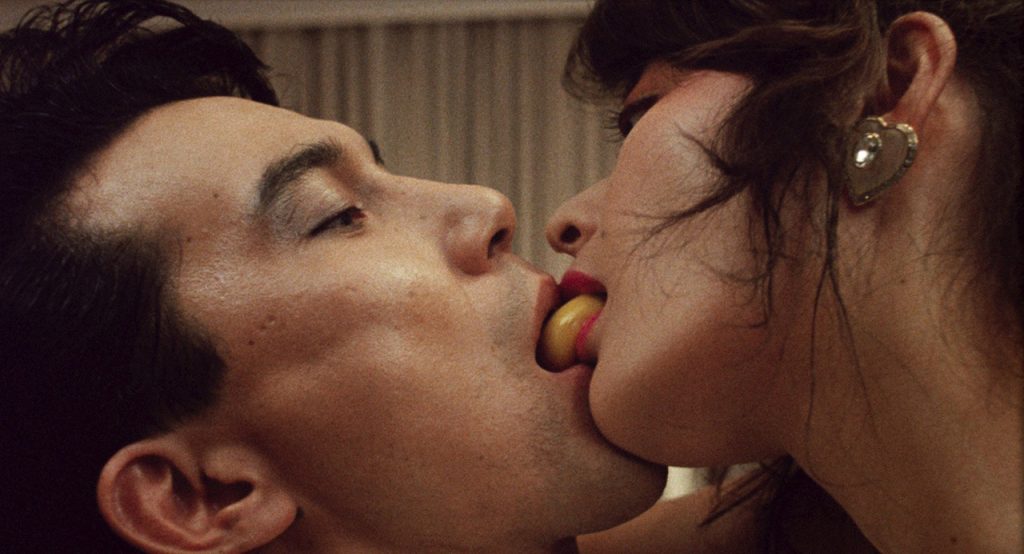 Itami’s comedies explore Japan’s transformation during its economic boom, when norms were being redefined. Tampopo came between The Funeral (1984), which details a family’s adherence to ornate rituals of honoring the dead, and A Taxing Woman (1987), about a crusading auditor ferreting out wealthy tax-dodgers, and the culinary subject matter allowed Itami to examine the high and low of Japanese society as well as the conformist middle class.

Everyone needs nourishment, and Itami found humor and poignancy in how it’s provided and received. His wife Miyamoto was the Giulietta Masina to his Federico Fellini, the heart in Itami’s absurdist humor. Her meek Tampopo isn’t thought to have the ability or stamina to make first-class ramen, but Miyamoto’s subtle portrayal of her growing confidence is a joy to behold. Food isn’t just consumed in Tampopo – every bite is an ode to life.

Review by Serena Donadoni
Re-released on October 21, 2016 by Janus Films
First published in The Village Voice, 2016.