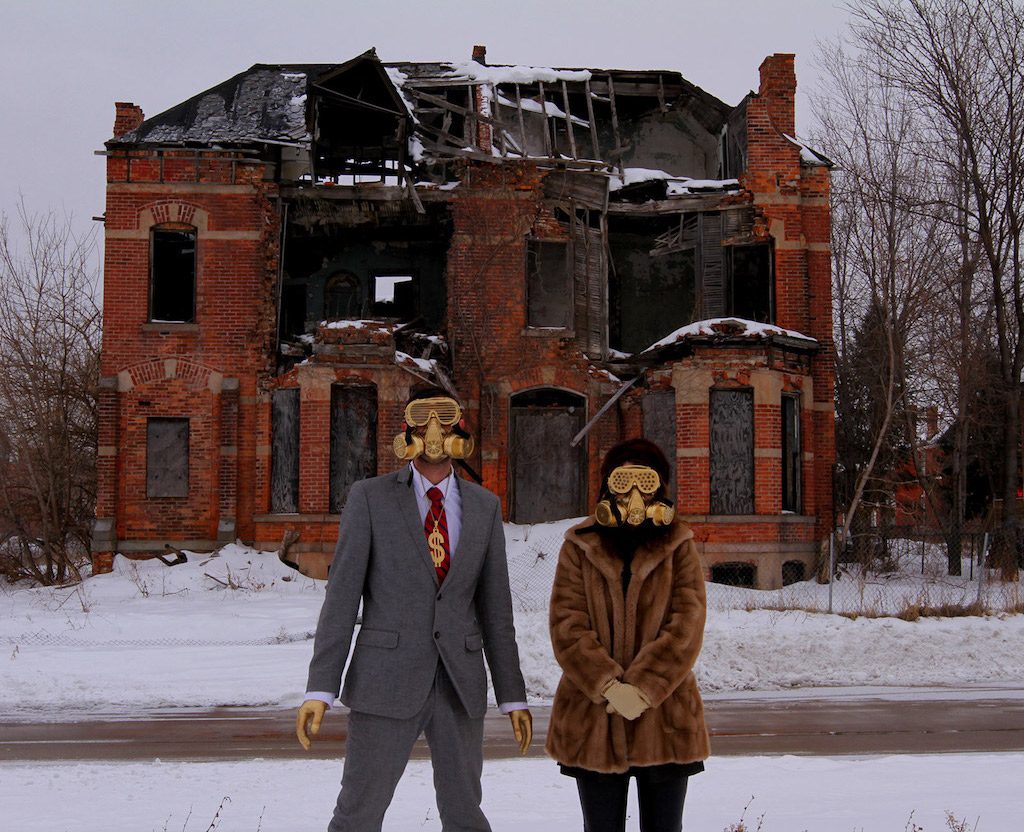 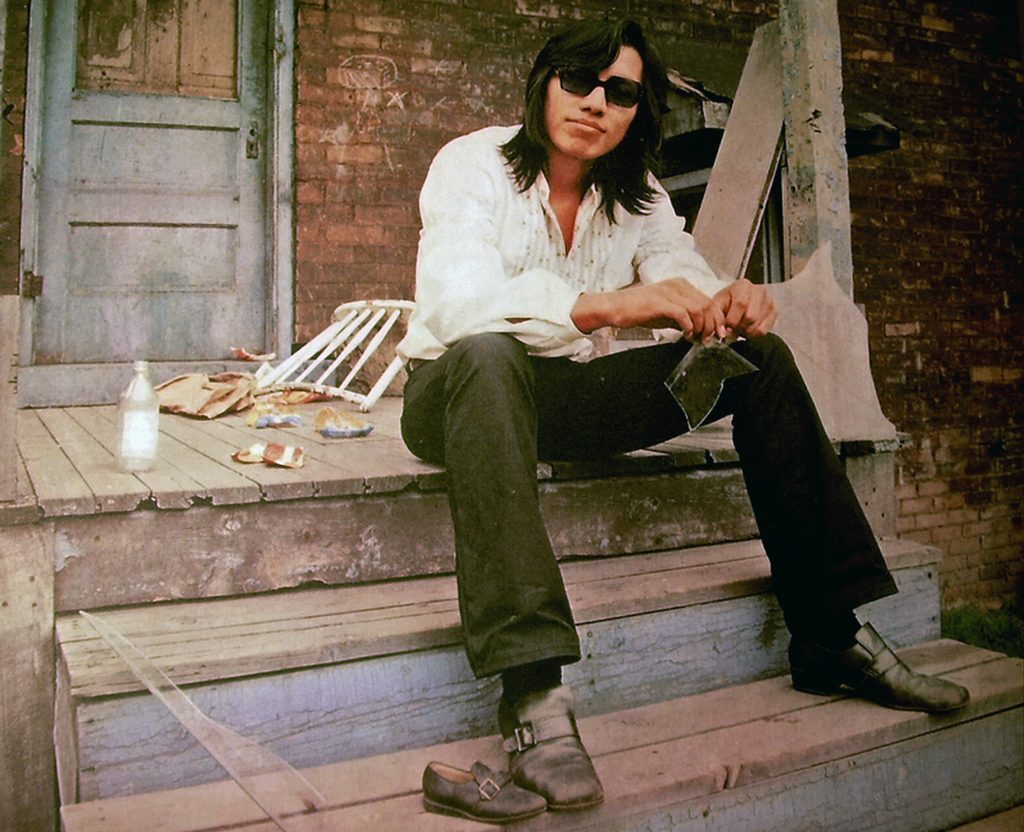 When the documentaries Detropia and Searching for Sugar Man premiered at the 2012 Sundance Film Festival, the national conversation about Detroit had begun to shift from blighted and crime-ridden city to chic rust belt haven for artists and entrepreneurs. This follows Detroit’s role as symbol of the 2008 economic crisis, when the mighty Big Three car companies threatened to collapse. The U.S. government bail-out was not controversial in Detroit. Even for residents who had no direct connection to General Motors, Chrysler, or Ford (which opted out of government aid and did not go into bankruptcy), it was a sobering moment. We thought Detroit had already touched bottom – then that floor nearly gave way.

Now the media attention has shifted to Detroit’s growing creative class. The Motor City already had a global reputation as Motown, a music center whose output goes beyond the radio-friendly R&B of the iconic record label to include jazz, blues, country, rock, funk, hip-hop, EDM, and the protest folk of Rodriguez, the little-known singer/songwriter profiled in Searching for Sugar Man. But recent media attention focused not on musicians, but twenty-something artists like Steve and Dorota Coy, who provide the primary image of Detropia. Dressed in a suit and fur coat, and wearing goggles and gas masks spray-painted in gleaming gold, they pose in front of a burned-out Brush Park mansion. It perfectly encapsulates the documentary: Detroit is their backdrop, not their home.

From accolades at Sundance (Searching for Sugar Man won an audience award and special jury prize, Detropia was recognized for its editing) to inclusion on the Oscar shortlist, these two high-profile documentaries have become part of the current conversation about Detroit. Heidi Ewing and Rachel Grady, the directors of Detropia, went the self-distribution route and gained attention from media outlets by pitching it as the explanation for Detroit’s decline. It’s a common documentary strategy: sell the story and interest in the film follows. Leading indie film distributor Sony Pictures Classics did the same with Searching for Sugar Man, promoting director Malik Bendjelloul alongside his subject, Sixto Rodriguez. While Sugar Man was covered in entertainment outlets, Detropia was positioned as a news story. Ewing (who grew up in suburban Oakland County) and Grady did numerous interviews about the sad state of Detroit and its ripple effects. They spoke about hope while selling the fear.

The filmmakers don’t quote the axiom, “As goes General Motors, so goes the nation,” but that sums up their unoriginal premise: Detroit’s demise results from the loss of manufacturing jobs amid America’s crumbling industrial base. Ewing and Grady take it a step further, espousing the idea that as Detroit goes, so goes America. The filmmakers focus on three black Detroiters: two former autoworkers who recall the glory days of full factories and bountiful paychecks; and video blogger Crystal Starr, who sees a vibrant city in its magnificent ruins. Their frustrations are contrasted with the optimistic Coys, who stand-in for the white newcomers eager to chronicle their Detroit adventure. 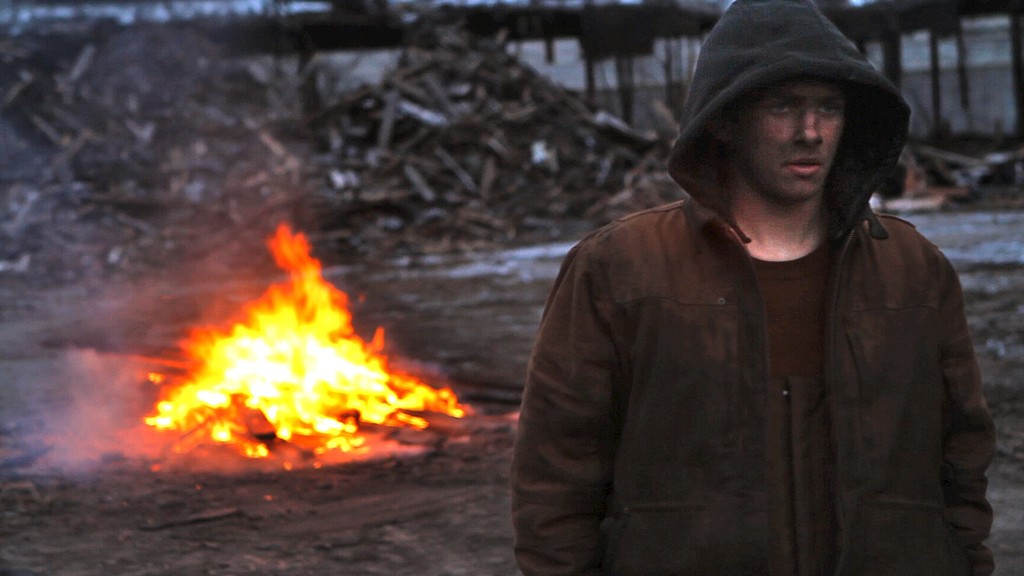 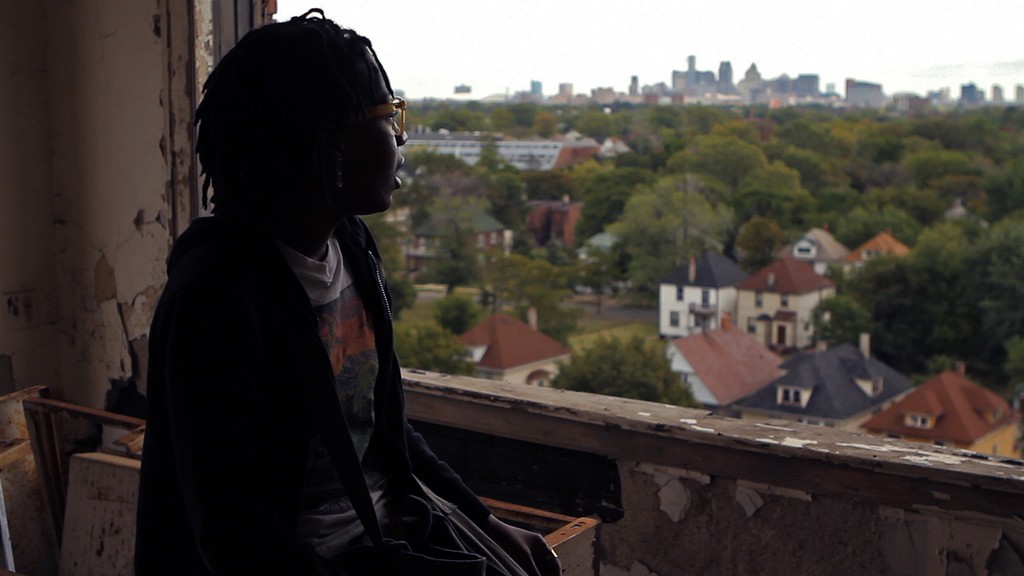 But Detropia never directly address race, a major issue in this predominantly black city, and one that turns any conversation about the integration of services with the state or surrounding communities into heated discussions of a “take over,” echoing the isolationist rhetoric of Detroit’s first black mayor, the bombastic Coleman Young. (Political and institutional corruption, epitomized by the federal trial of another former mayor, Kwame Kilpatrick, is also never broached.) Detroit is more than black and white, but no one profiled is Latino, Arab, or Asian. There are no immigrants, and no parents of school-age children. Inclusion of these groups might make Detropia less cohesive and more messy, like the city itself.

Even when they capture something distinctive on camera, Ewing and Grady wedge it into their reductive narrative. The parade of costumed revelers in Detropia is the Marche du Nain Rouge, which began in 2010. In a cheeky nod to the city’s French founders, the Marche functions as a secular Mardi Gras festival, a kind of spring cleaning for bad mojo. It takes place in an area once known as the Cass Corridor but now called Midtown, a rechristening that heralded investment and turned one of Detroit’s most notoriously run-down neighborhoods into one of the city’s few thriving, well-populated areas. They use this footage merely as backdrop for a factoid: recent census information notes an influx of college-educated residents.

In the worst case of misunderstanding a Detroit reality, they portray scrappers as resourceful lost boys of the working class. Scrappers are the parasites of Detroit, not only ripping apart abandoned industrial structures, but stripping unoccupied houses of their heating and water systems, thereby rendering them uninhabitable. Many scrappers, like the ones captured in Detropia, do this to their own neighborhoods, hastening the decline for what amounts to pocket change. This is the flip side of Steve Coy’s delight in Detroit’s inexpensive real estate: life is cheap.

Before being christened Detropia, it had the working title Detroit Hustles Harder, referring to a popular local slogan, but it’s Sixto Rodriguez who embodies this defiant mantra. Malik Bendjelloul’s debut documentary is primarily about the white South African fans who adopted Rodriguez’s 1970 debut Cold Fact as their rallying cry against apartheid. They thought the musician long dead, but his disappearance came after commercial failure. This working class poet displays a notable lack of bitterness, and the upbeat Searching for Sugar Man became the third highest-grossing documentary of 2012 and went on to win the Academy Award. (Detropia didn’t make it to the final five nominations.) 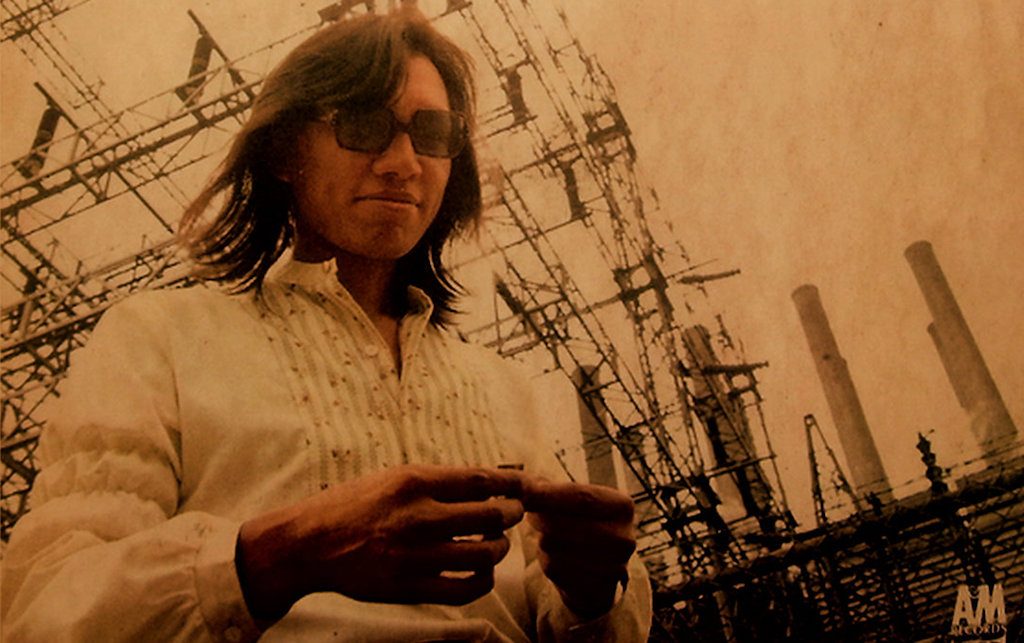 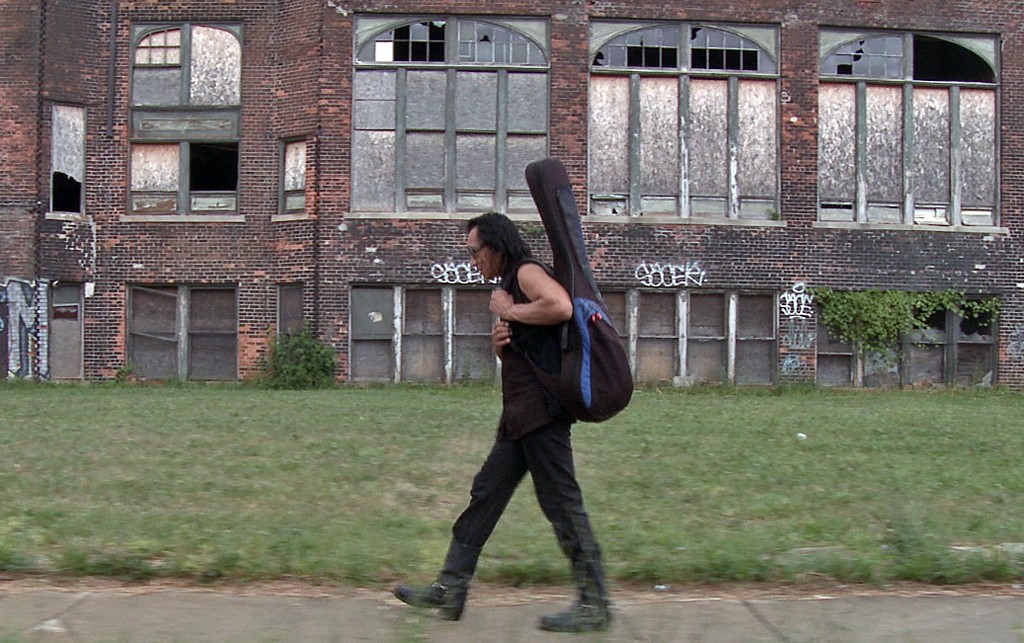 In Rodriguez, Bendjelloul found an archetypal Detroit artist who lives outside the limelight, but whose outlook benefits his family and community. His three daughters describe an upbringing where material wealth was less important than artistic pursuits and local activism. That Sixto worked construction for decades is no surprise: most Detroit artists support themselves with a day job, be it blue collar, white collar, or service industry. Rodriguez’s joyful recent performances, including the Ann Arbor Folk Festival, reveal a man who just kept living instead of bemoaning his lack of success. Now 70, this Detroiter remains amiable and stubborn, modest and self-reliant. Grateful that people are listening, he doesn’t think high-profile gigs and recording his first album in 42 years means he should abandon his privacy or alter his spartan way of life. But the shy singer has made one major change: he no longer turns his back to the audience.

The only musicians featured in Detropia are affiliated with the Detroit Opera House, a 1922 building that was once known as the Grand Circus Theatre. Like many of Detroit’s glorious movie houses, it did go from showing A-list Hollywood releases to cheap exploitation fare, but the Grand Circus wasn’t, as the film’s press notes assert, “a long shuttered triple X movie palace.” I didn’t know it as a movie theater, but I’ve witnessed its metamorphosis. In 1982, during its brief life as a live concert venue, I saw The Clash during their final tour, with rapper Kurtis Blow as the controversial opening act. (Motown’s harmonious integration is the ideal, but Detroit’s reality finds audiences segregated along musical lines.) In 1994, I watched Theater Grottesco stage an astounding piece of post-apocalyptic buffoonery called The Angels’ Cradle in the gutted theater, what artistic director John Flax recalls as “that beautiful and perfectly decrepit building.” In 1996, I wore a hardhat to view the final stages of construction with DOH Managing Director Kimberly Johnson who told me, “The biggest challenge on this project was getting people to see when it wasn’t here. To get them to believe.” In 2012, I attended a packed David Sedaris reading in one of Detroit’s restored architectural marvels, still going strong.

What Detropia misses, and Searching for Sugar Man captures, is that Detroit is a living ghost town. The feeling of abandonment is deep in our bones, but so is an angry defiance. When Burt Lancaster looks out over Manhattan in The Sweet Smell of Success and says, “I love this dirty town,” he could have been talking about Detroit: a city that’s infuriating and inspiring, decaying and exhilarating. As Detroit is commencing another major upheaval, these documentaries capture the first moments when we could see beyond the rubble of our past. Detroiters are more like Sixto Rodriguez – a long-neglected figure finally getting recognition for his talent and perseverance – and less a canary in a coal mine or harbinger of doom. Our problems may be connected to larger economic and social forces, but they are also distinctly our own. The reductive Detropia fails to recognize that specificity, and utterly misses the Detroitness of Detroit.